The Enemy’s Defeat is Imminent. Freedom is Coming! 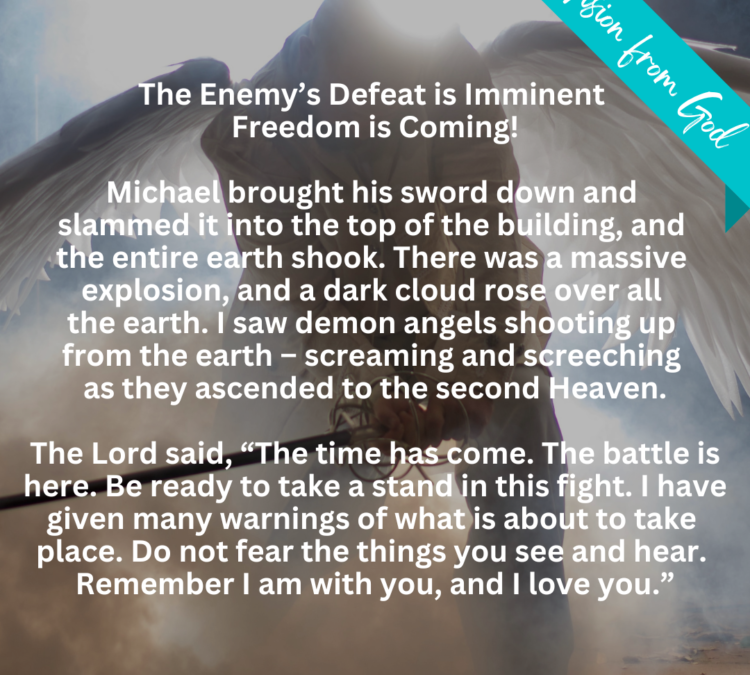 I was sitting and waiting on the Lord, and I was taken into a vision. I saw Michael the archangel standing on top of a vey important building in the United States with a sword in his hands. He brought the sword down swiftly and slammed it into the top of this building, and the entire earth shook. I was standing high above in the Heavens while watching this take place. White light – like electricity came shooting up, and as I watched – I saw what looked like an explosion – this was a massive explosion, and a dark cloud rose over all the earth.

I then saw demon angels shooting up from the earth – screaming and screeching – as they ascended to the second Heaven. This went on for some time, and as the dark cloud over the earth began to dissipate, I saw SO MANY angels from Heaven surrounding people on earth. And just as Michael placed his sword into this very important building in the United States, I saw other warrior angels in other nations – also standing atop their very important building with their swords embedded into the building.

I heard in my spirit, “The war is almost over.” Excitement flooded my entire body!

I continued to watch, and I saw people – the ones that had been long deceived by the enemy – I saw them falling to their knees. Once the sword hit the top of that important building in the United States, and those demons began to shoot up into the second Heaven, that meant they were no longer tormenting those people – no longer holding them captive with the lies of the enemy. So, those people began to spill all of what had been taking place. One after another began to tell their story of what they had been doing, or what they had witnessed.

They could no longer hold it in – it came spewing out all around the world. It was shocking to see HOW MANY people had been a part of the enemy’s plan.

As the dark clouds continued to clear, I then could see more people on earth – the Lord’s Ekklesia – the ones who have partnered with Him in this fight. They were standing strong together – in unity – all around the world.

Their arms were linked, and they were praying – for they knew what was about to take place. I then saw what was across from them in the spirit – the enemy’s dark angels ready to take on God’s Ekklesia. The battle line had been drawn. It was a stand-off unlike anything that has ever been experienced on earth.

I then saw in the spirit – God’s angels coming to stand behind His Ekklesia on earth – ALL around the world. These angels were massive – they were ready, as I’ve mentioned many times before – and they were well prepared for this battle.

And this thought came to my mind – “There are more of us than there are of them.” This is something the Lord has said to me several times.

I heard the Lord speak, “The intensity of this battle will continue to grow, and it will be felt all around the world.

Stay close to Me, and you will not be harmed. Now is the time to repent – don’t wait until it’s too late.

I am coming to defeat the enemy – he will NOT have My children. He will not win this battle.

The time has come. The battle is here. Be ready to take a stand in this fight.

You have nothing to fear, for I am with you. Watch as your enemy falls before you. Watch as I take him down. I have given many warnings of what is about to take place. Your freedom is at hand.

Do not fear the things you see and hear. ALL of these things MUST take place – the enemy MUST be defeated.

I am with you – and as the days ahead unfold – freedom will come in and replace all of your fears and anxiety. My peace and My love will flood your hearts and minds.

Trust in Me – there are more of us than there are of them. We will win this battle.

Stay close to Me. The time has come for you to stand up and fight in unity with your brothers and sisters in Christ all around the world.

Remember…I am with you, and I love you.”

Thank You, Father! Yes, Yes, YES! We are ready to put an end to what the enemy has been doing. We are thankful You chose THIS generation to be a part of this amazing time here on earth – to defeat the enemy and bring in the Billion Soul Harvest! We are with You. We will fight with You! Amen!

Things are getting more and more interesting in the spirit realm. Stay close to God, and you will not be harmed. Freedom is coming!

In His love,
Kathy